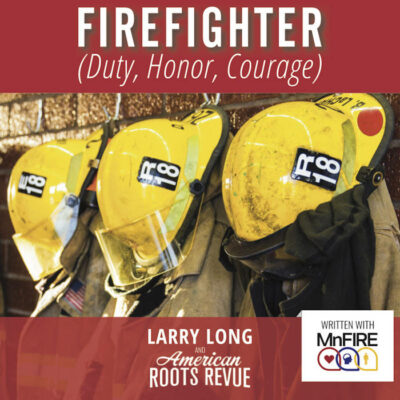 Minnesota musician Larry Long was inspired to write “Firefighter” – along with Eden Prairie’s retired-fire chief (and current MnFIRE president) George Esbensen – after he accompanied firefighters on a call to a business fire.

“While on that fire run I was so deeply struck by the brave and hardworking people that save our lives daily. The firefighter filled with ‘Duty, Honor, and Courage’ represents everything worth standing up and striving for as a nation,” said Long. “When I discovered the high rate of heart disease, cancer and Post Traumatic Stress Disorder (PTSD) among firefighters, I felt the calling to write ‘Firefighter’. For there’s no better time than now to urge policymakers to give all that it might take for us to support the physical and emotional well-being of those who serve us.”

“Firefighter (Duty, Honor, Courage),” was written with MnFIRE as an anthem for the state’s firefighters as the 2020 legislative session begins and the Hometown Heroes Assistance Program (SF2264 and HF1782) is up for consideration once again.

Since its inception in 2017, the Minnesota Firefighter Initiative (MnFIRE) has been dedicated to providing Minnesota’s firefighters with the tools they need to prioritize and protect their health by focusing on the three health problems most commonly experienced by those in the fire service: cancer, cardiac and emotional trauma. In addition to spearheading the legislative initiative, MnFIRE trains Minnesota firefighters to become “MnFIRE Aware” of their higher risks for cancer, cardiac issues and emotional trauma. The organization has already trained 389 departments, reaching approximately 7,900 firefighters across Minnesota. The organization launched a 24-hour peer support hotline for firefighters struggling with mental health issues in 2018. For more information, visit www.MNFireInitiative.com.

Here’s to the people who put out the fires
Fall into line seem never to tire
In helmets of red, white, yellow, and black